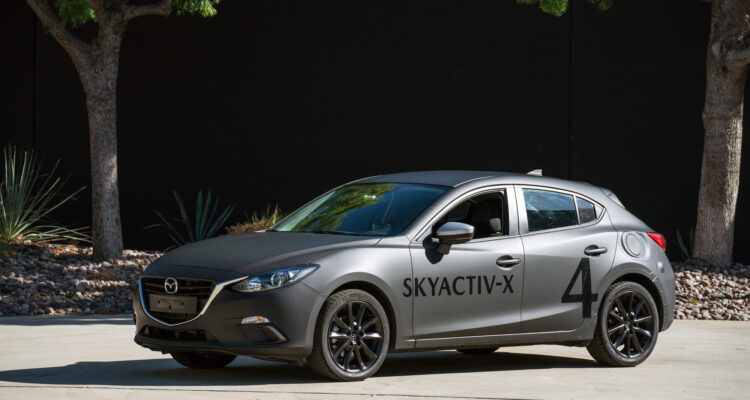 IRVINE, Calif. — While other carmakers have been busy building electric vehicles, hybrids and fuel cell-powered cars, Mazda has taken a different approach.

Robert Davis, the company’s senior vice-president, special assignments, said Mazda’s predictions hold that the internal combustion engine, in some form or another, will remain a key, base-level technology in vehicles for years, even as electric and hybrid vehicles increase in number.

“If the base-engine technology can be improved, why not improve it?” he said.

He said the company’s focus since launching the Skyactiv program in 2012 has been on squeezing the most fuel efficiency out of an internal combustion engine as possible before adding electric power.

He said electrified vehicles remain a niche product and improving internal combustion efficiency has benefits with or without electric. Despite generous incentives, electric vehicles still represent only five per cent of the U.S. market and three per cent of Canada’s.

“That’s why we feel so strongly about getting the internal combustion engine right before we start layering on electrification technologies.”

Dave Coleman, powertrain engineer, said Mazda’s work has found ways to reduce the myriad losses inside an engine, from losses that restrict airflow, friction and pressure that hinder piston movement inside cylinders and on making the combustion process as “instant” as possible.

“Getting these things right is absolutely crucial, and will pay dividends down the road,” he said.

As proof, he points to Mazda’s ranking as the No.1 carmaker in average fuel economy and lowest carbon-dioxide emissions. “For a company that doesn’t sell any electrics or hybrids, that’s a pretty remarkable achievement.”

The latest example of that work goes into production in 2019: the Skyactiv-x gasoline engine.

“We’ve long known the ideal model for an internal combustion engine lies at the convergence of gasoline and diesel technology,” said Jay Chen, another powertrain engineer for Mazda.

Diesel engines work by having the fuel self-ignite under pressure at the top of the compression stroke. It’s more efficient largely because such a process makes the combustion considerably quicker. The efficiency comes at a cost of higher levels of carbon-dioxide per litre burned, however.

With a gas engine, the fireball spreads out from the spark plug, so not all the fuel-air mixture in the cylinder is ignited at the same time, under the same pressure and at the same temperature. Gasoline engines have also typically required a one-to-one ratio of fuel to air.

Yet, making a gasoline engine that self-ignites like a diesel engine has been hampered by the volatility of gasoline and the fuel’s susceptibility to changes in temperature, barometric pressure and humidity. That makes it impossible to predict when the combustion will occur, and predicting the timing of that event is critical in not having the engine blow itself up.

Where does Skyactiv-x come in? It’s the first production-ready gasoline engine that works, almost, like a diesel engine.

It uses a combination of a spark plug and self-ignition to burn the gasoline, and can run under ideal conditions as lean as two parts air to one part fuel. In simple terms, here’s what happens: at the right point in the cycle, fuel is injected into the cylinder using a system that creates a vortex in the air-fuel mixture inside the cylinder. This creates a pocket of air-fuel mixture that’s just a bit richer (more fuel) than the surrounding swirl of air-fuel. It all gets compressed by the upward stroke of the piston and at the right time, the spark plug fires.

This is where the diesel-esque magic happens. Because even the little pocket of fuel near the spark plug is as lean as it is, its fireball remains small, but what it does, in a predictable way, is raise the pressure inside the cylinder enough that the rest of the mixture combusts almost instantly.

Chen said Mazda’s team knew from the beginning the Skyactiv-x engine would need a spark plug, simply because it’s not yet possible to run a gas engine in diesel mode all the time. Previous attempts at compression ignition of gasoline — most notably at the University of Wisconsin — found it worked only at specific engine speeds. The U of Wisconsin engine was used to power a generator that drove electric motors.

“So, if you’re going to have a spark plug anyway, why not use it to control the timing of when the ignition happens?” he said.

Chen said sensors mounted in the cylinders monitor the combustion event, and allow the car’s computer to alter fuel mixture and spark plug timing as needed on subsequent events.

The first production version of the Skyactiv-x will hit assembly lines in 2019. What vehicles, and for what markets, Mazda isn’t saying.

Even so, we had a chance to drive prototype Mazda3 models with the Skyactiv-x engine. The impression I had, which was shared by other journalists on the program, is the use of Skyactiv-x technology will be invisible to the consumer.