Did you drive much for the first 3 months? We didn’t. In fact, the last time our Mini Cooper’s tank was filled was the very day the COVID curtain came down, March 13th. (I recall that media personalities avoided the predictable lighthearted banter about this 13th being a Friday. Anxiety was already widespread enough.) For 12 weeks, we occasionally drove 4 blocks to the supermarket, 3 more to the liquor store and back. Our 30th anniversary celebration, which was supposed to happen in Greece, comprised a 5km-drive to the Humber River, where we walked the dog.

The tank was still ¾ full after 14 weeks, when the Mini’s first drive of more than 15 minutes was to the Chrysler plant to pick up a 2-door Jeep Wrangler Rubicon.

The initial verdict? It rests, motionless on the parking pad, every bit as well as the Mini. The secondary verdict: it was more utility than city folk like us needed. Don’t get me wrong. I’m a lifelong fan of Jeeps, most especially the Wrangler, a veritable bouncy castle for grownups. It just isn’t your first choice for driving bringing a 20lb bag of kibble home from Pets-R-Us in the middle of global pandemic.

On the other hand, following months of almost no driving, my skills were a bit rusty and it was comforting to commandeer such an indestructible tank!

Moreover, we had other destinations. We’d been invited by relatives on either side of our marriage to visit their country getaways outside the GTA. First my wife’s brother at his chalet, then my cousin’s farm 2 nights later. After months of nothing but screen-time, all this love!

So, after 5 days of watching the Wrangler shade the weeds breaking through our parking pad, we drove it to a remote corner of the Niagara Escarpment for a nervy 1-night retreat. Was it weird for you too, the first time you spent time in someone else’s home in this new way? Fortunately for us, it was sunny and hot. We spent most of the time outside but scary what-ifs loomed over every visit to the bathroom — and every dish washed at the kitchen sink.

Sorry, this is a bummer. Let’s talk about the Wrangler!

Rubicon is a rating that means said Jeep can scale pretty much any surface like a 4-wheeled Spiderman, and venture anywhere off-road, including watercourses, with a multiplicity of driving modes. Indeed, this Wrangler could’ve easily forded the Beaver River we kayaked in the morning, but that would’ve been anti-social given the numerous nearby bridges and other kayaking bird-watchers.

One component worthy of note (in this column devoted to the gradual electrification of driving everywhere): the 3.6L engine with “etorque”. At first, this marketing word looks like the name of a villainous and oily lucha libre contestant but the name proves descriptively accurate. The lightest flutter of the foot slingshoots this gorilla forward like a dancer. A big engine is usually much noisier. Moreover, its hybrid system obviates the alternator, and renders an almost imperceptible start in the start-stop technology. Remember the lurch that such technology delivered not even a decade ago when introduced?

This entire visit to these in-laws was only 26 hours and the distance from home 150km: hardly the stuff of adventure you’d have expected in this publication, say, a year ago. But after 3 months of quarantinis with bitmapping virtual people stacked in Brady Bunch boxes, suddenly socializing with living, breathing relatives felt like our own private Odyssey. We left feeling refreshed, grateful and emboldened.

Next day, that is the same day that the Wrangler went home, I picked up a Chevrolet Bolt, GM’s low-priced and almost as fun to drive electric vehicle. While both pickup/drop-off spots would be considered ‘Toronto’ by our friends across Canada, the distance between the one in Mississauga and other in Pickering (neither of which is in TO) is nearly 70 white-knuckled kilometres. That’s nearly half the distance to the above escape in the country — and, barring that escape, still farther than I’d driven for three months. It felt adventurous and dangerous. Impressive how much and how quickly your standards can change.

Oddly, despite the thinning of traffic that COVID’s provided the GTA, drivers here are still world-class stupid. And there ain’t no vaccine for that yet.

Directly from the Bolt’s rendezvous in Pickering, I drove to my cousin’s farm north of Oshawa. It’s exactly 7km west of Mosport race track, a destination many readers of this publication know well. On race days, depending on the wind, you can hear that whine of engines — except if it’s the Nissan Micra Cup which only dogs and children can hear.

You can’t hear the Chevy Bolt either. The 2020’s estimated range on a full charge is over 400km but that depends on how you drive it and how high you’re cranking the A/C, stereo or heating the seat. This day that I picked it up, it had been dropped off late and uncharged. So, by the time I picked it up around 2pm, it was only partially juiced, indicating a range of around 220km.

Again, these are estimates. I managed to get the Bolt the entire 45km to my cousin’s using only 30km’s worth of electricity. As with a gasoline-powered car, you extend your range by minimizing the sudden starts and stops and driving consistently within the sweet spot between around 65 to 100kph. I won’t lie and say I didn’t occasionally test the Bolt’s immediate electric thrust of torque but police near Mosport track are used to nailing drivers pretending to be on it. Proceed with caution.

The shifter, popularly known as the pickle and all you need to know about how cool it makes you look, is a bit different from most. An extra pull back beyond D into L, provides one-pedal driving mode. Once you lift your foot off the accelerator, the motor slows the wheels and the regenerates the battery. At the risk contradiction, I can say it’s gas to drive in L mode!

HD surround vision and rear-view camera mirror render a crisp view — and if someone’s head is blocking the mirror, you can see through them, vampire-like. A tab in the back engages the rear-view camera. It increases your visibility and enriches the depth. Caution: things in mirror may look sharper than they really are. 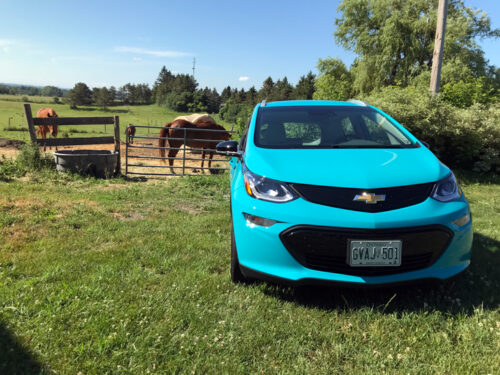 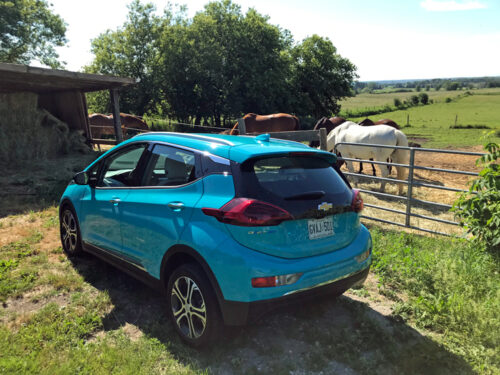 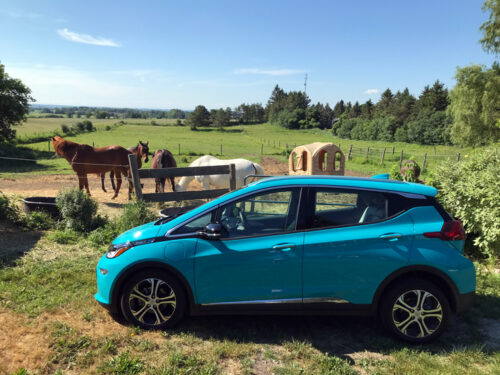 Anyway, I was at my cousin’s farm within a half hour and spent the rest of the visit outdoors, barely moving at all. The summer heat was volcanic and languid. I had no intention of wasting battery power unnecessarily on A/C when we already had ice cream and a pool there. There was already enough general anxiety about that adding range anxiety would only bum us out. After sundown we played acoustic guitar, further preserving electricity.

Next day, I made my way home, a quick 75km, and that was the all the exploring the Bolt did, but for a couple of trips to nearby stores. The real adventure was to come in a couple of weeks: a drive to your nation’s capital in the Mini to visit friends, a 400km drive each way. Anna and Norman have a big house in the centre of town and we were to occupy an entire floor of our own.

Maybe we’d try to see Justin during one of his moist press moments at Rideau Cottage. Or maybe we could get hollered at and abused by the Governor General just down the road at Rideau Hall. On the return trip, we planned to visit my sister who lives in Napanee, home of Avril Lavigne and just 10km east of Shannonville Race Track, another spot many readers of and contributors to this publication know well.

What adventure! So much fodder to write about! We were starting to feel bolder! This pandemic ain’t so heavy.

Then on the day before driving to Ottawa, Anna called. Their daughter had been hanging out with a young man who’d tested positive. STOP!

They were off at that very moment to get tested themselves. Our visit was abruptly canceled.

Still, once bitten! It’s no Thessaloniki, Greece, but we’ve booked a cottage for a week 600km northeast for next month near Thessalon, Ontario. There are a couple of boats, beachfront privacy, a vast deck, and a nearby friend who stores a significant gun collection by Canadian standards. Maybe there’ll be more to talk about then!

Till that time, let’s all stay vigilant and tentative.