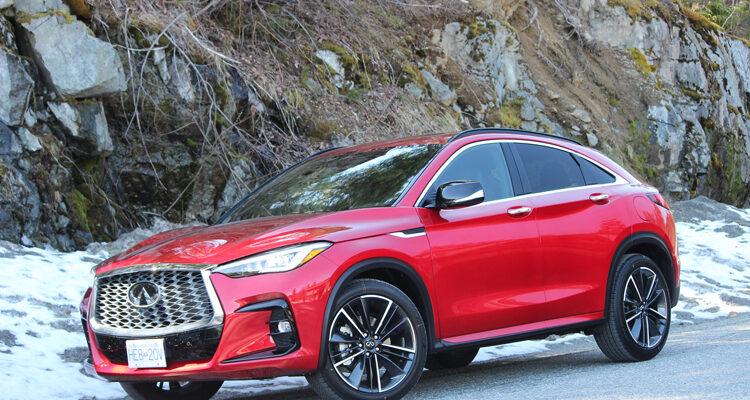 Infiniti is entering – or was that re-entering? – the four-door coupe-crossover game for 2022 with this: the QX55.

While the QX55 is an all-new model that shares a platform and many parts with the QX50 crossover, it eschews that vehicle’s hatchback profile for a swooping rear deck, smaller rear doors and a slightly more aggressive stance. It’s Infiniti’s answer to the likes of the BMW X4 and the Mercedes-Benz GLC Coupe, and it’s the first time a Japanese manufacturer has entered the fray.

Infiniti maintains that the QX55 draws much of its inspiration from the Infiniti FX Series that ran from 2003-2017, although a look at these two vehicles presents a pretty different profile, and there’s actually more room in the QX55 than there ever was in the FX. The FX is all about the long hood and cab-rearward look; the QX is more modern than that. Also, the FX was based on a rear-wheel-drive platform, while the QX is based on a front-wheel-drive platform, though they are both all-wheel-drive vehicles.

Put simply; when I look at the QX55, I don’t see the FX. That’s not an affront to either vehicle; I just don’t see the connection.

Regardless of all that, though, the QX55 is a real-looker. We’ve already spoken of the profile but there’s great detailing as well; the headlamp lenses, chrome grille (some may say it’s too big; I say “not a chance”), two-tone 20-inch wheels and even the 3D effect the taillamp lenses get is a nice touch, as is the “Infiniti” scripting across the rear tailgate. It’s a great-looking car, the only issue for me being a bit too much of a gap between the fender and tire (at all four corners, unfortunately), giving the impression that those wheels are a little smaller than they are.

Other than that, though, this is a pretty car, especially when finished in the Dynamic Sunstone Red ‘do my tester had. It turned heads most everywhere I went and it’s saying something that Infiniti has managed to take the QX50 – already a sharp styling exercise – and really improve on it even past that roofline.

After all; the QX55 is aimed at a younger buying group, according to Infiniti, the type of buyer that likes some swoopy styling and practicality be (somewhat) darned. They like a good-looking car that drives well, and Infiniti has set out to deliver just that.

Inside, the QX55 loses a couple of millimetres of front headroom but it’s not enough to notice; I had no problem wearing a baseball hat and looking up without jamming by bill into the headliner. The seating position in the Zero-Gravity seats developed in partnership with NASA is right on; I expected to be tilted back a bit because I thought the styling of the vehicle warranted that but that’s not the case at all, and the seats are very comfortable and supportive. However: the fact they’re adjustable only eight ways means certain body types could find a hard time finding that perfect balance.

After that, the way you interact with the vehicle depends on how much you can get on with two enormous screens that make up the centre console. They’re big and bright but luckily for the traditionalists, you don’t have to use the touchscreen for everything as there are traditional “hard” buttons down each side for your climate control, seat heating/cooling controls and media controls. And of course, there’s support for Android Auto and – for the first time in an Infiniti — wireless Apple CarPlay although since there’s no wireless charging, it makes that last feature a little redundant.

The thing about wireless charge pads, though, is that they serve the dual purpose of both charging your phone and giving you a place to store it. You don’t have that luxury here and more than that, there isn’t really another perfect place to store your device, leaving you to either hide it in the central storage bin (potentially with a bunch of other crap) or one of the cupholders. Not ideal. I do appreciate the heated seats and steering wheel, though, although not having ventilated front seats or heated rear seats as an option is a bit of a shame.

It should come as no surprise that the rear seats have lost a little more space to the QX50 than the fronts, but the QX55 does get reclining rear seatbacks as well as the ability to slide the seat fore and aft. Even with my 6’3” frame, I could make my way back there although I have a feeling most of the folks back there are going to be of the 0-13 year-old variety.

Being able to slide those seats also helps the cargo area in that you can increase the length of the load floor. Which is good, because thanks to that sloping rear tailgate, you can’t pile your wares quite as high back there; the QX55 loses 127 litres of cargo room to the QX50.

So you sacrifice a little bit of practicality for the sake of style but that all fades as soon as you start the QX55 as it all comes down to that engine, which is a gem of a powerplant.

It’s the second time we’ve seen Infiniti’s variable-compression turbo four-cylinder (VC-Turbo) in Canada and it turns the neat trick of providing the fuel economy of a diesel, with the performance and smooth operation of a gasoline turbo. They do that by doing exactly as the name suggests; changing the compression ratio anywhere from 8:1 to 14:1 in the blink of an eye.

That’s the idea in theory. In practice, it provides bonafide performance CUV (or even performance car) acceleration and speed thanks to its 268 horsepower and 280 pound-feet of torque fed through a CVT auto through to all four wheels. Yes; it has a CVT – a transmission type that typically doesn’t provide that much drive involvement – but Infiniti has tuned their CVT and given it some “virtual” shift points selected via wheel-mounted paddles so it feels like few other CVTs I’ve tried before from Honda, Subaru, Nissan and Jeep. The manufacturer says they’ve also tuned the CVT differently from that of the QX50 because the buyers they’re aiming at would appreciate it. I know I do. 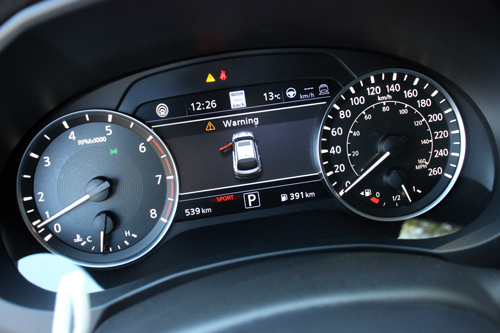 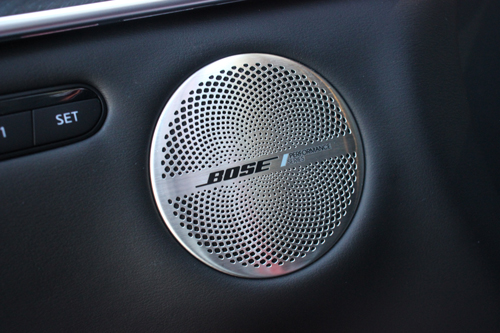 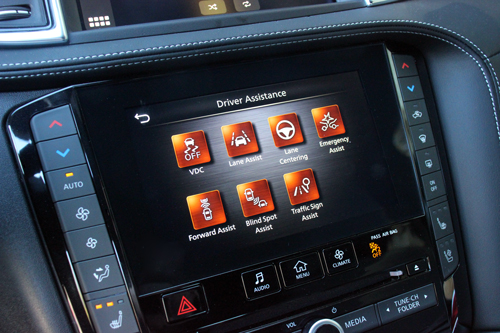 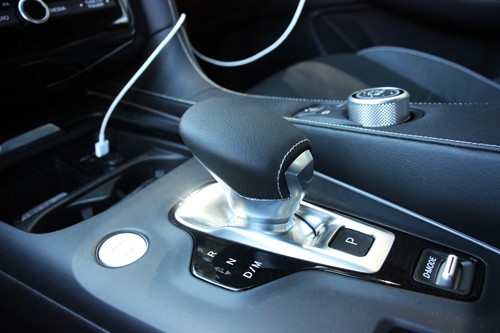 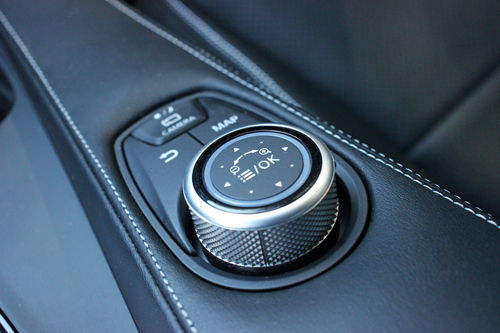 This is an absolute cracker of a crossover that moves a lot faster than the numbers suggest. I have seen some of my colleagues say that they’d do well to provide a plug-in hybrid or hybrid option, but I’m not so sure it needs it. The QX50 may be a different story because of its target audience, but having to add hybrid running gear to the QX55 would cost more space – likely in the cargo area – in addition to what’s already been lost from the QX50.

Of course that gear would also add extra weight, which would surely upset the handling and you wouldn’t want that as aside from just a titch more body roll than I expected, the QX55’s handling is spot on – but you have to trust it.

I say that because like many Infinitis, the QX55 uses a steer-by-wire system. Basically, that means there’s a clutch between the wheel and front axle, and driver inputs are received electronically and then instructions are transmitted to the front axle. What this does is make for steering that lets you individually adjust both the weight and responsiveness. That’s great and the differences can readily be felt, but it does cost a bit of communication between the front wheels and steering wheel so you have to learn to trust how it will respond to your inputs. In additional to the baked-in drive modes such as “Standard” and “Sport”, there’s also “Personal” that lets you set your own parameters. This is all done via menus displayed on the lower of the two screens, which works well. 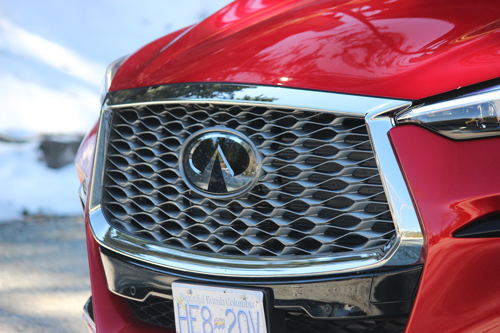 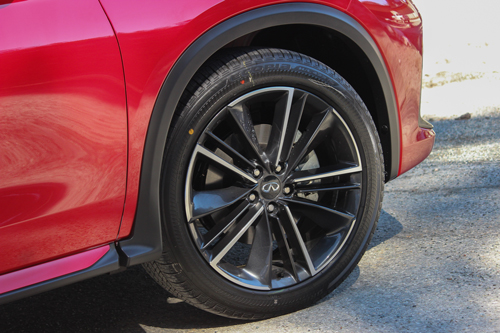 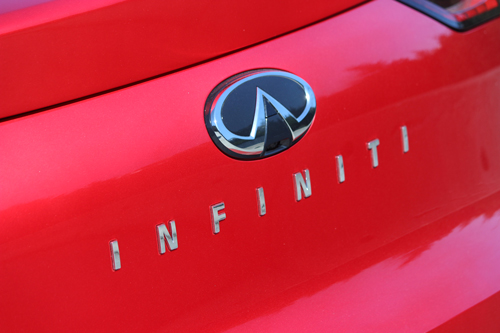 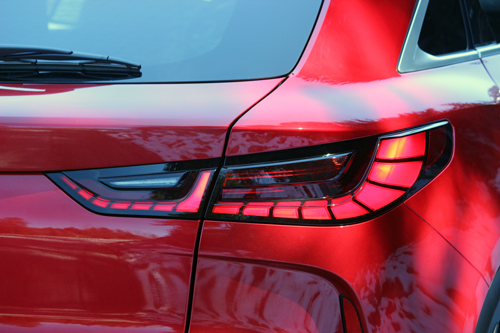 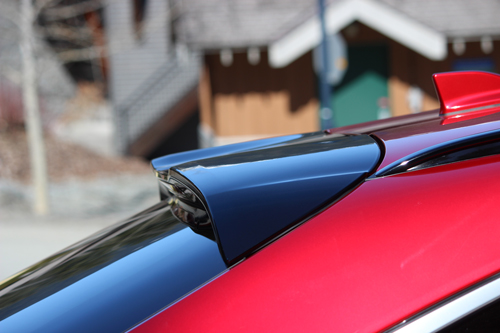 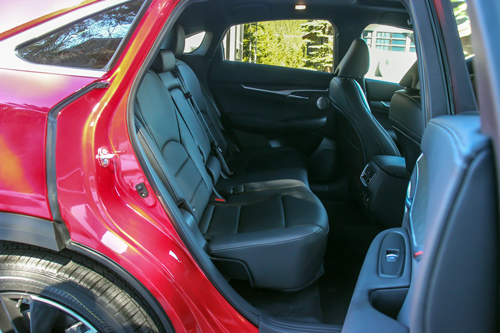 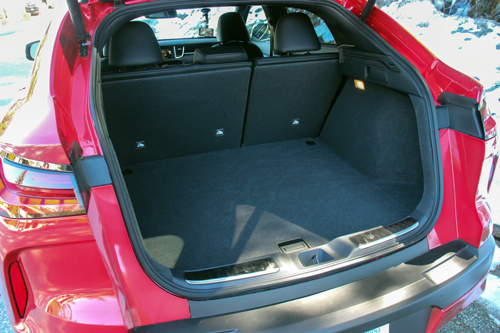 I don’t love, however, that you have to use that same screen to turn various driver aids on and off. I’d rather do that via hard buttons or at least via a menu within the gauge cluster, as that means you don’t have to look as far away from the road ahead of you.

Speaking of driver aids, there are many: blind spot assist and intervention, lane-centering assist, lane-keep assist, forward collision assist and so on. It’s great that we have these, but only a few can be changed via quick-access hard buttons and the one that I wish was but isn’t, is lane-keep assist. I find LKA systems annoying because they too often bounce off the lines, and I’d love to be able to just press a button—on the wheel, the dash, so on – to deactivate it.

That’s a minor quibble, though. The QX55 set out to “grow down” Infiniti a little and judging by the interest shown (from a distance, of course!) of many thirtysomethings during my test shows that it has the look. A drive has shown me that they’re on to something in the performance department, too.