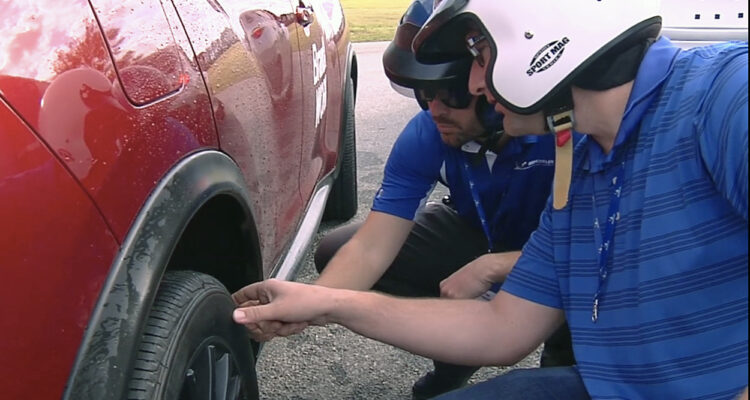 Baloney skins. Slippery skates. Party balloons. There is no end to the terms slapped on worn out tires. The baloney label is my favourite because that food was a staple on our Newfoundland dinner table and now I’m suddenly hungry.

Derision towards unsafe tires is warranted. After all, those four fist-sized patches of rubber are the sole part of a car that actually touches the ground. Driving the point home, we spent a day at Michelin’s proving grounds in South Carolina comparing new tires and worn tires on equally-prepped cars. 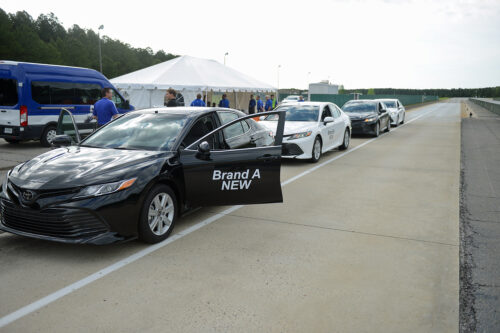 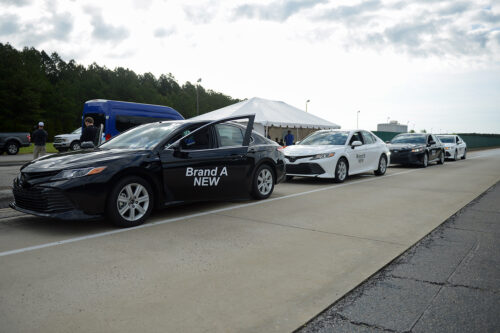 The narrative isn’t to make the point that new tires perform better than worn ones, a fact as reliable as the sunrise. Instead, Michelin’s goal is to create a discussion about worn tires, as they feel it is an important topic for drivers and industry as a whole. Not all tires wear with the same amount of vigor, we learned, and tossing out a set of tires too early has both financial and environmental costs. 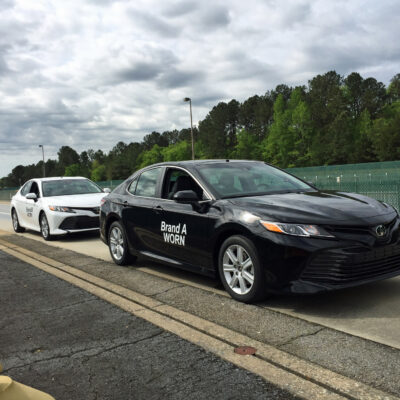 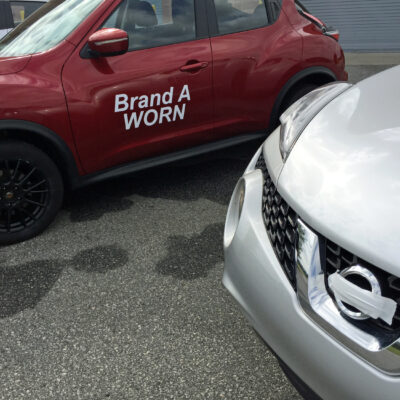 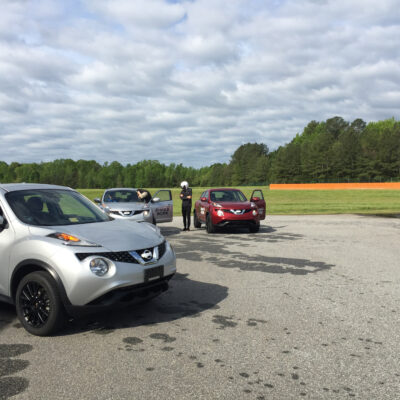 To facilitate blind testing, Michelin buffed off any identifying markers on the tire sidewalls. Clearly, ‘Brand A’ were Michelins and, after studying the tread pattern, your author believes they were Premier A/S rubber. In the ‘Brand B’ corner, Michelin Technical Director Tom Carter, a man with 32 years of testing experience at Michelin and who has probably driven more miles in reverse than I have in forward, gave up the brand name with a little cajoling.

It wasn’t the cheapest tire they could find, made from lint and used elementary-school erasers, but instead a Goodyear product. He stopped short of naming the actual model of tire but a careful perusal of available Goodyear tread patterns point towards the Eagle Sport A/S line, hardly a cheap all-season tire.

Both sets of worn tires, the Michelins and Goodyears, were artificially worn to a tread depth of 3/32nds (2.4mm) using a special buffing machine. Yes, a machine exists specifically for the purpose of wearing down tires. Give me a 707hp Challenger Hellcat and I’ll wear down those tires for free. By the way, 10/32nds (8.0mm) is generally the tread depth of a new all-season passenger tire.

Using the buffing machine allows Michelin to create a sample size of rubber in a controlled environment in which they can perform repeatable and reliable tests. The worn measure of 3/32nds is generally considered to be very near the end of a tire’s useful life and just a hair above what will pass inspection in most provinces.

Our hosts set up two tests. The first, a wet handling course, provided great seat-of-the-pants illustrations between all four sets of rubber. The second exam was a measure of straight-line braking and provided quantifiable data sets to satisfy chart nerds.

In rented front-wheel drive Nissan Jukes, we took to a handling track which combined turns of various difficulty with an avoidance area tossed in for good measure (imagine abruptly steering around a moose who has rudely sauntered onto the roadway). The traction control was turned off and the automatic transmission was firmly in ‘D’.

Starting with new Brand A tires (Michelins), the little Nissan crossover played nicely with the wet tarmac as lateral movement could be detected but only at speeds that would far outstrip my own comfort level on any wet public road. On Brand B tires (Goodyears), the front-wheel drive machine was noticeably more squirrely while accelerating out of turn but seemed to perform similarly under braking. No real surprises so far. 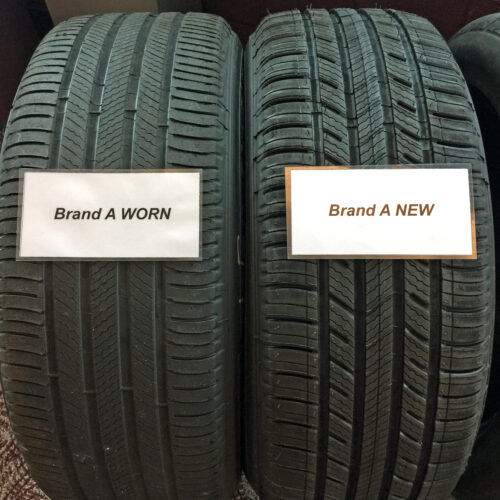 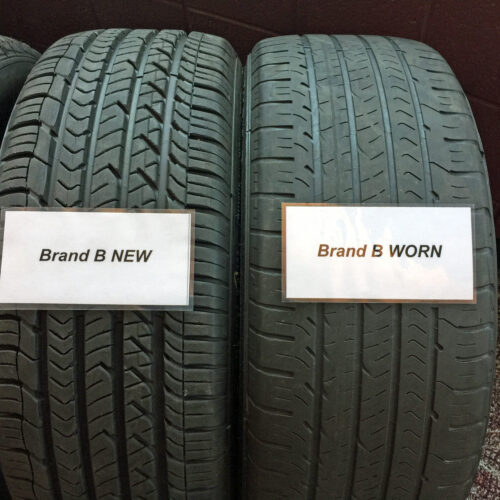 Technically, the Michelin folks reminded us, a driver is rolling on worn tire the minute they leave the tire shop. The change to a completely worn tire is gradual, sometimes taking years depending a person’s driving habits.

Think of it this way. If a parent sees their child every day, they’re not apt to realize how much Junior has grown until he’s suddenly too big for the jeans he got for Christmas. It’s only when Nan and Pop appear to say “Look how much you’ve grown!” is the difference realized. Our perception of a tire’s grip is much the same.

That’s why jumping into the Jukes with worn tires immediately after piloting the same type of car with new tires was such a revelation. The worn Michelins understeered at every opportunity, compounding the problem by spinning its rubber while fighting for traction as I accelerated out of a corner. Worn tires of the Brand B variety were a proverbial gong show, with severely degraded grip in all directions. Our Juke’s windshield was sodden with splashes of water as well, something that didn’t happen on the other three runs around the wet course.

For braking, we accelerated to 70km/h in brand-new Camry sedan rentals (this is why you don’t buy used rental cars, kids), then hammered the brakes to simulate an emergency stop, again on wet pavement.

The Camry wearing new Brand A tires stopped in 81.6 feet, while worn Brand As added just over ten feet to that result, putting a cap on the old saw that “brakes stop the wheel but tires stop the car”. Such an increase was not overly surprising, however.

In fact, we were still moving over 40km/h when we passed the spot where we stopped in the car wearing new Brand A tires. This means that, if we stopped just short of an obstacle on that rubber, we would have plowed headlong into [another car/wildlife/disabled schoolchildren] at a not-insignificant speed.

The big takeaway here, compared to the handling course, was the lack of difference in braking feel between the four different samples. In the panic situation, your author – far from any sort of professional driving ace – would not recognize any performance degradation as his brain was too busy performing tasks to haul the Camry to a stop from 70km/h.

It was only the data recorder, telling me the difference in stopping distances, that made clear the point that most drivers don’t realize how much performance they’re giving up on worn tires. Experiencing a year or more worth of tire wear in the span of a day emphasized how much a tire’s performance falls off as they wear … and that not all tires wear equally.

Right now, Michelin says studies have shown that most consumers base their tire purchasing decisions on price and warranty. By measuring the performance of worn tires, customers will have another data point to use in make an informed decision when buying a new set of rubber.

And that’s no baloney.