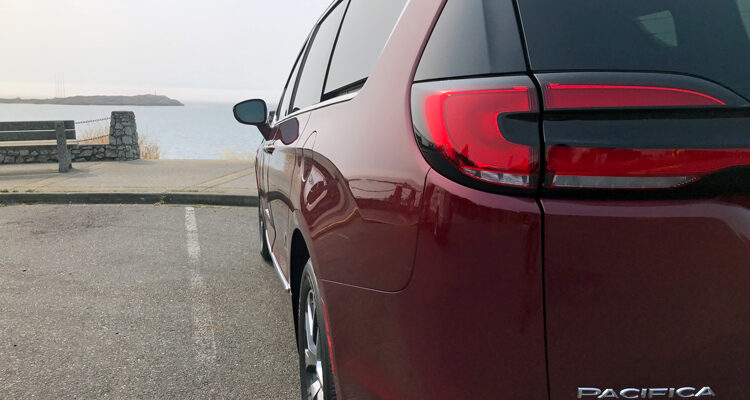 When Breathing Becomes an Argument for the Transition from Fossil Fuels

Vancouver, Friday, the 13th — Throwing his hands up in radical acceptance, Richard, the rep at the Chrysler dealership in Richmond BC, half apologizes. See, there’s a layer of ash crowning the surface of the Pacifica Pinnacle Hybrid minivan that he’s prepared for me to drive across Canada. And it hadn’t been washed in a few hours.

The Pacific Northwest’s experiencing what you should call an unprecedented heatwave. But now it is precedented. Just last month a similar malevolently hot weather system loitered over the whole Pacific Northwest for days, triggering a boon for air condition profiteers in the cities, and worry over wildfires everywhere.

Flying here over the western cordillera yesterday, the skies weren’t cloudy. They were thick with smoke, light a ‘60s art-film dream sequence. Occasionally the Rockies emerged from the brume, their white caps now ashen.

Friday afternoon, Vancouver felt as hot and sticky as Toronto was two days ago, but different. The palpability of the air wasn’t the boggy miasma Lake Ontario’s wet dog-blanket of humidity creates. This was acrid.

I spent the evening in the company of dear old friends on a restaurant patio in Kitsilano — it’s one of those neighbourhoods about which everyone here has a strong opinion. Afterwards, our voices were rough and nearly an octave lower. If we’d sworn off consonants, we’d sound like Rocky Balboa.

The weather’s enough to spark conversation about electric vehicles. We’ll talk about the Pacifica’s hybrid powertrain here over the next few days. Of course, electrification’s not a whole solution, but when simply breathing underlines the urgency of a mass transition from fossil fuels, it’s time to talk.

Cue the Celine Dion. Here we are with the Chrysler Pacifica on the immense BC Ferry from Vancouver to Vancouver Island. Both my kids live in Victoria. In two days, the younger one and I will be on the return trip, attempting to move her across 2/3s of this huge country.

From the Pacific in the Pacifica was the thinking — or something like that.

Remember that in-between planet that the evil Queen from The Lion, The Witch and Wardrobe came from? An ancient orange sun that had long blown its best-before date hovered rusty gold in her netherworld.

That’s today’s sunrise. Low-grade anxiety over the wildfire still hangs in the air like the smoke it’s generating — but there’s no denying the accompanying frissons of excitement. After all, this trip will create memories for a lifetime.

Oh, one correction: this ferry’s not quite traveling from Vancouver but Tsawwassen, an exurb 30km south, easily accessible by highway. Then, there’s another 30km drive from Swartz Bay into Victoria. It’s a bit like those cheap European airlines that advertise themselves as link to major cities. Your ticket says you’re flying from London but, as the taxi meter ticks past the hundred-pound mark, you learn in real-time that your airport’s halfway to Manchester. So, today I left early, wanting plenty of time to make the Tsawwassen ferry without haste.

Because let’s face it, if you get a speeding ticket in a minivan, you’re a putz.