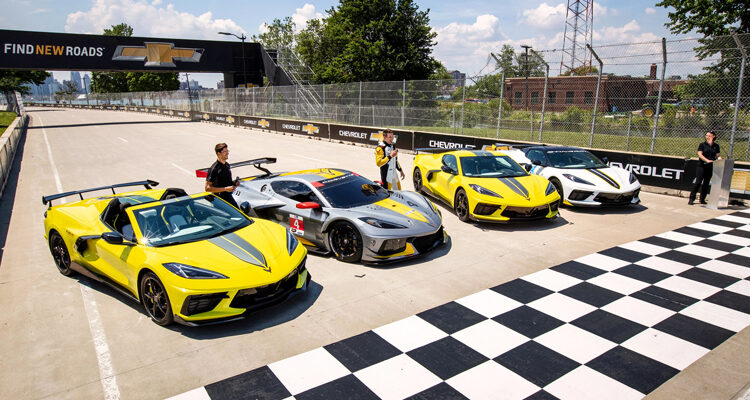 Chevrolet is ringing in the Corvette’s new 2022 model year in a big way, by introducing the – take a breath – 2022 Corvette Stingray IMSA GTLM Championship Edition. It’s the first special edition we’ve seen of the new mid-engined ‘Vette, and it comes on the heels of manufacturer, driver and team titles in the 2020 IMSA WeatherTech Sports Car Championship for Corvette Racing. Over the course of the season, Corvette Racing captured six victories, seven pole positions and set fastest laps in six races.

To commemorate this, Chevrolet is taking the ’22 ‘Vette’s 3LT trim with Z51 Performance Package and adding Corvette Racing-themed graphics, as well as attaching a number to each, to reflect the actual race team’s organization: The No. 3 edition gets finished in Accelerate Yellow, while the No. 4 edition gets Hypersonic Gray colouring. The latter colour is new to Corvette, and joins Caffeine and Amplify Orange as the three new available colours for 2022.

Other stylistic additions to the GTLM include a carbon finish for the spoiler, yellow brake calipers, special wheels adorned with Corvette Racing’s “Jake” logo, carbon exterior mirrors and black side rockers. Inside, there is colour-matched upholstery as well as yellow seatbelts and special number plaque. To put a cherry on top, each car comes with a car cover that’s adorned with an image of the actual race car. It’s not the Z06 model that we were hoping to hear about by now, but this is siull a pretty cool special edition of an already special car.

Other new ads for all Corvettes in 2022 include upgraded fuel injection and active fuel management system. Otherwise, we’re looking at the same power figures 490 horsepower (495 hp with performance exhaust) and 465 pound-feet of torque, and we see the return of available magnetic ride control and a total of 356 l of storage space spread across bin in the back and front of the car.

Look for the 2022 Corvette Stingray to be arriving in showrooms later this summer.