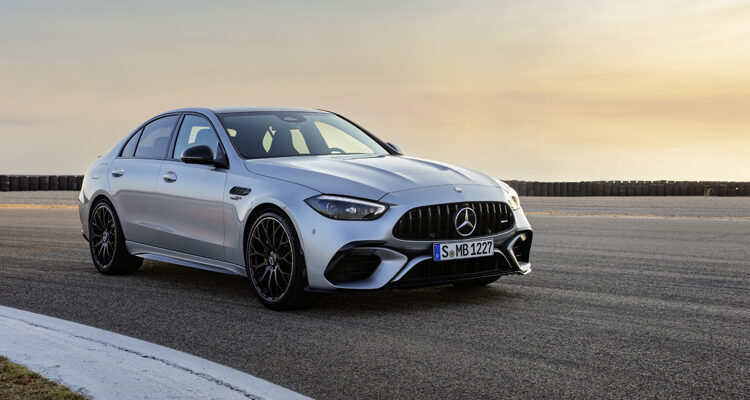 It is the end of the V8 era for the Mercedes-Benz C-Class AMG, but don’t think that means it’s the end of the performance era for Mercedes’ popular compact. Today, the German manufacturer pulled the wraps off the next evolution of the C63 S, and with it comes yet another addition to a very long name: the letter “E” (full name: Mercedes-AMG C63 S E Performance, hashtag “eyeroll”) because this new C 63 is a…hybrid. Not just any hybrid, either, but a plug-in hybrid (PHEV). I can just see the skin crawling all over the AMG masses as I write this.

They should probably chill out, though, just a little. 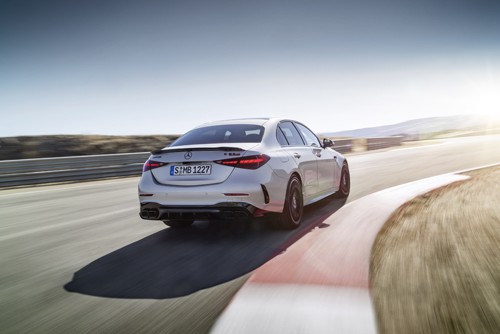 More than just a petrol engine, though, the new C63 also gets a 204 hp EV motor with a 400V high-performance battery. That means that total system power is a certifiably bonkers 671 horsepower and 752 – seven-hundred-fifty-two! – pound-feet of torque. It’s also got an electrically-operated turbocharger that’s also exhaust operated – even the turbo’s a hybrid! — so turbo lag is greatly reduced. The C63 can even cruise for a claimed 13 km of EV driving. That’s not a lot, but with four levels of battery regen available and the ability to plug-in, it may be enough to reduce your daily fuel use by half.

On the other end of the spectrum, meanwhile, those figures paired with a nine-speed multi-clutch Speedshift auto mean a 0-100 km/h sprint of just 3.4 seconds, which is not something that a compact sedan should really be capable of – but there you have it.

It’s all technology developed for the AMG-Petronas W13 E Performance Formula 1 car, further showing that if you thought the C63 had gone soft, you may want to think again. 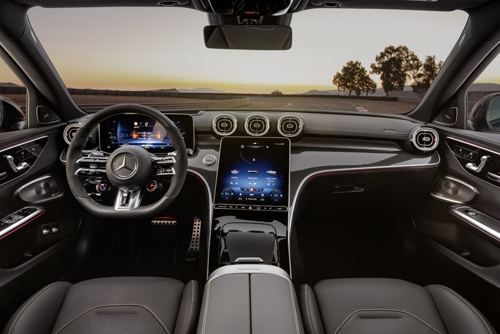 On the handling front, the EV motor and battery are positioned at the rear axle for better weight distribution and the ability to more quickly transmit its power to the rear wheels. There’s also standard rear-wheel steering that has the rear wheels swiveling up to 2.5 degrees in the opposite direction of the fronts at low speeds to reduce your turning radius, and up to 0.7 degrees in the same direction as the front wheels at higher speeds for better stability. On top of that, you get a Drift drive mode that makes use of the rear-wheel-steering to allow for more tail-happy hijinks. That mode, by the way, is one of eight that also include Comfort, Electric, Sport and Race modes, all selectable by a scroll wheel attached to the spoke, just as AMG has been doing for the past five years or so.

Styling-wise, the new C63 follows in the footsteps of the older model by looking tougher than the standard C-Class without yelling to loudly about it. You still have the red brake calipers, wider tires wrapped around larger wheels, a deeper front splitter, carbon trunk spoiler and quad exhaust outlets. The car pictured here is finished in the silver AMGs and Mercedes racers have always been known for but expect plenty of bright colour choices when these start hitting dealers. 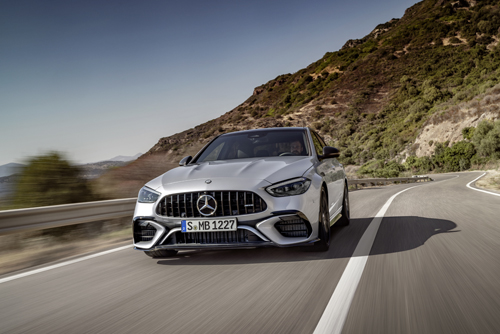 There is one crucial new detail, however: for the first time, the AMG coat of arms logo will be appearing on the exterior of an AMG product, right there at the leading edge of the hood, where a secondary three-pointed star badge typically sits. Very cool.

Yes; the new car is about 200 kilos heavier than the old one and we will miss the growl of a V8, but those are more ethereal things that car “purists” feel they need to enjoy a vehicle. There is definitely some validity to that argument but at the end of the day, most buyers at this level want the latest and greatest and that means hybrid, and that means big power. The C63 S E has both, and it will likely be a huge hit for the brand.

We know that we can’t wait to drive it – watch this space.