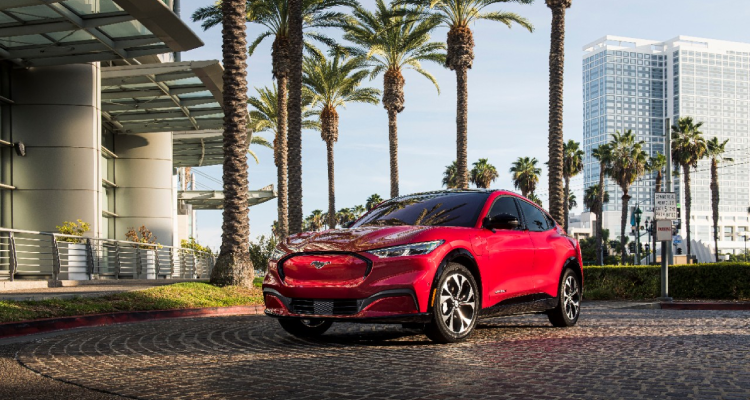 AJAC EcoMonth and the Mach-E — Day 3

June 10, internet — No manufacturer offers multiple trims of a brand-new product unless they mean business, and the 2021 Mustang Mach-E is now available for order in Canada in four trims: Select, Premium, California Route 1, and GT Performance Edition— but not yet the First Edition, the tester I have for the week because it’s already sold out. Moreover, you can subdivide some of those trims between all-wheel and rear-wheel drive. That’s a lot of product.

However, they’re all part of a close family. So, getting specific about details within and across the range should help clarify just how practical a Mach-E would be —especially their price, power and dimensions. (Except for the slightly smaller turning circle of the GT Performance, all trims share the same dimensions.)

The Mach-E’s competing in the quickly growing world of luxury performance electric vehicles (EVs) and belongs there. It’s a thrill to drive. The base trim’s MSRP (you want fries with that? You want ketchup with those fries?) starts at $50,495 and the top-shelf GT Performance Edition at $82,995. For perspective, the First Edition I’m testing this week is $75,145 all in.

Here’s some of the utility that lies within that price range.

When you build an EV from the ground up without adapting an existing model into a hybrid, you have certain inherent advantages. First, there’s no internal combustion engine or gas tank. It’s powered by a big battery but your designers decide where the battery goes. As with most EVs, the Mach-E’s is beneath the floor. Which frees up a great deal of cargo space: behind the rear seat that’s 841 litres; flatten that seat and you expand it to 1,689 litres. But what does that look like?

If you’re from outside of Ontario, you may be surprised to learn that you can buy milk in 1.3-litre bags here. (And if you’re from Ontario? Let’s be honest: It’s sad when what makes you ‘interesting’ is how you trade in something as white and milquetoast as milk.) So, if you folded the seat down and packed carefully, you could fill any Mach-E with 1,299 bags of milk. But what does THAT look like? Well, divided as we’ve become as a society, for some reason we still agree that measurements should be explained in football fields. Let’s do that. We don’t have any milk bags in the house (or in the Mach-E parked outside) at the time of writing but do own a standard-sized plastic, made-in-Canada milk bag container. It’s 19cm tall and 13cm wide. The metric length of an American football field is 91.44m, aka 9144cm. If you laid 1,299 bags of milk lengthwise, you’d probably be arrested but you could also extend the line of bags across 246.81m, aka 2.7 American football fields.

But this is Canada and we don’t want the milk going bad. You could lay them lengthwise across 4.04 hockey rinks. But what if you lay the milk bags width-wise, you may be wondering. Well that’s just silly.

Now, we all know that language is an evolving thing and imposing boundaries on it is stupid but doesn’t ‘frunk’ sound even stupider?

Yes, let’s not make fetch happen. Besides, after 15 months of nothing but panic-eating on the sofa, the expression front trunk is something we can all relate to. This one offers another 133 litres of space. You couldn’t pack that amount of milk there though because it’s compartmentalized with dividers to keep any cargo from shifting too much.

Anyway, there’s lots of space in the Mach-E to carry stuff around. But how far can you carry it? We’ve come to think of EVs as urban transporters, maybe a less-polluting second family car. And over 80% of Canadians live in cities, so there’s a huge market. We all know how much of the market the Ford F-150 pickup truck, Canada’s most popular vehicle since the dawn of time, owns outside of cities. Small wonder they’re training their eye on this other market in vastly more populated cities.

The Mach-E has a smog rating of 10/10, which sounds counterintuitive but means it doesn’t emit toxic fumes. And our exhaustive exploration above has shown how much grocery volume you could carry on the commute back from work.

But the Mach-E isn’t just a commuter’s back-and-forth tootler. Its ride lasts.

The Mach-E comes with usable battery capacity of 68-kWh or 88-kWh capacity in costlier trims. That’s a lot of hours. According to that esteemed and, one assumes, peer-reviewed publication Far Out Magazine, the Beatles’ entire discography lasts only about ten hours. But doesn’t mean you could listen to every Beatles song ever legally released nearly seven (or nine) times while driving before you ran out of power. It means you have 68 or 88 hours’ worth of juice to power something that demands 1,000 watts. Depending on how you drive, how comfortable you like to be behind the wheel in any weather conditions and how many non-essential gadgets — from the Mach-E’s gorgeous B&O audio system to your kids’ charging tablets and phones — are sucking power during the drive, you’ll need different amounts of power.

And that’s why all mileage (why don’t we have kilometrage yet?) is an estimate and not the rule in any vehicle, and why it’s so closely scrutinized in EVs as ‘range’. Range anxiety is as real as first-world problems and manufacturers seeking to convert future masses will need to allay it.

The base Select version’s estimated range is 340km and you can buy an extension to 370km. My tester’s is 435km! Even in the sprawling Greater Toronto Region, that’s more than enough range to get you well out of town.

Ergo, the Mach-E could be a country or city vehicle — or that one-for-all vehicle that so many buyers desire these days and so many manufacturers are aiming to supply.

A bit more about those batteries.

Many EVs on the market have till lately been cool what-if experiments — vanity projects — demonstrations of where the future could go. But with the recent leapfrogs forward in mass EV output by heavy hitters like GM, Volvo and let’s not forget Tesla, the future is pretty much here. (Consider: Jeff Bezos, that other tax-dodger everyone thinks about when someone says Tesla, is going to space next week.) And the future is electric — with range and infrastructure to support that.

Earlier we talked about how an EV’s power source — a sub-floor of batteries lying beneath your feet — created space throughout the vehicle. It also drops your centre of gravity, almost gluing you to the road where other crossovers may tip. That’s part of what makes for an exhilarating ride. But without the need to shift through gears, an EV also offers almost full lift-off immediately. In the Select all-wheel drive trim, that’s 428 lb-ft of torque.

And what does that mean in terms of football fields? It’s not quite a bullet from a gun, but it’s way more than a t-shirt from a novelty shirt canon. You go from 0 to 60mph (96kmh) in 5.5 seconds. At the top-end trim, the GT Performance emits 634 lb-ft, almost a real canon! If you’re considering an EV, do ask for a test drive of the Mach-E and find some deserted hills and corners.

To cop a famous tire manufacturer’s age-old slogan and reapply it to the EV market, so much is riding on your batteries. The Mach-E’s are warranted for eight years or 160,000km. And what do those numbers mean? Ford means EV business.