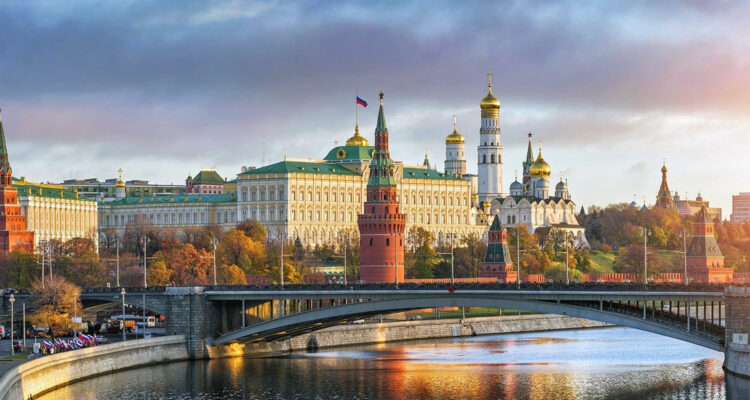 A Mission To Moscow

The burly policeman swaggered past me, opened the door and slid in behind the wheel. He grabbed the gearshift and wrapped his other calloused mitt around the steering wheel. Worn boots danced across the throttle, brake and clutch pedals as he slammed the shifter back and forth.

“Good thing I shut the engine off.” I thought, slipping the keys into my jacket pocket.

Wind-burned lips quivered as the intruder imitated the sound of a racing car. Stubby fingers molested every switch and knob as a spray of saliva appeared on the dashboard. 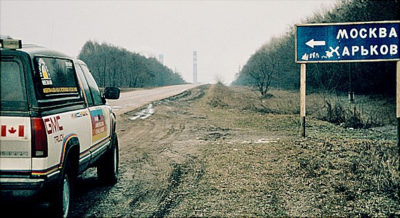 “Spasibo,” I said to the dubious officer. It meant thank you and was the only Russian word I knew.

“Whisky,” he replied, collecting his composure and climbing out of the truck. I had a feeling things might get complicated as I followed the officer back to the cruiser – a faded red Lada with an awkward lean. A radar gun, with “92” flashing on its display, lay on the front seat. Just ahead stood a tiny speed sign with “60” in the center of it.

“Please don’t look in there.” I thought, eyeing the tailgate of my grimy Canadian-registered pickup truck. Through the tinted windows of the camper shell the outline of stacked boxes seemed obvious.

A series of hand movements and body language eventually convinced the officer that I didn’t have any whisky. My defense was entirely in English except for the string of “spasibos” I uttered while slowly backtracking to the truck.

I pulled onto the road behind a smoke-belching transport truck. A Ukrainian license plate dangled from its tailgate by a single strand of baling wire.

It was 1992 and I was enroute from London to Moscow in a 1988 GMC Sierra 3500. It was the same diesel-powered pickup I had driven from Tierra del Fuego, South America to Alaska’s Arctic coast in a record 23 days a few years earlier.

I had heard of a British organization, Book Aid, that collected a million children’s books for Russian schools and libraries and was having a hard time delivering them. Since I was in London for the release of a book on the Americas adventure, and had always had a yearning to drive to Moscow, I offered to take as many as I could. I managed to cram 4,000 books into the truck, but the lack of documentation regarding the payload meant winging it without customs papers through numerous border posts and checkpoints.

The weight of the books, plus 96 gallons of extra diesel fuel, left the truck sitting suspiciously low – just enough to tempt curious roadside officials to take a look inside. Fortunately the Germans didn’t examine the payload. Nor did the Austrians or the Slovaks, who were more interested in issuing a $72 transit visa. I reached the Ukrainian border without unlocking the tailgate once.

There, I slid into a dingy, monochromatic world. Colour simply disappeared. The pollution made my eyes sting. I passed row upon row of identical high-rise apartment blocks that, from a distance, looked like giant doll-houses rotting in a neglected yard. Faded laundry hung from the balconies. A thick blanket of haze hid the sun. Not surprisingly, a thousand eyes pinned themselves on the colourful, sticker-laden truck while I cruised the broken roads of Ukraine.

Lingering banks of dense gray fog clung to the slopes of the Carpathian Mountains as I maneuvered the winding, rutted road. Traffic was light, but the mud was thick, and it took six hours to drive the 250 kilometres to Lvov. Since there were no direction signs in Lvov, I followed the streets with the most oil stains through the city of 750,000 before continuing east on a much better concrete road.

With a questionable travel visa, no spare parts and a five-year-old vehicle that had already been through its share of abuse in South America tense was the order of the day. I was  operating an overloaded truck along a thin line of faith in my ability to keep luck on my side, the Ladas out of my grille, and the authorities away from the sketchy paperwork.

After an overnight stop in Kiev I set out on the 700-kilometre drive to Moscow. Then, just after crossing the frontier between Ukraine and Russia, I found myself in the company of the aforementioned policeman who was so keen on whisky.

Closer to Moscow the roadside authorities became more inquisitive, but strings of “spasibos” and the odd toy car always got me going. I pulled into the Russian capital about two o’clock on a Monday afternoon and called the Library of Foreign Literature. Its director asked me to drop by at noon the next day, which would give her time to set up a reception and to arrange for some children to help unload most of the books.

The reception went well. I shook hands with plenty of dignitaries. Through an interpreter, I exchanged kind words about the end of the Cold War and the importance of education. They smothered me with gratitude.

Later, I drove across Moscow to a school and handed out the books to 200 children and a teacher who looked like Jimmy Stewart.

Just before I drove away, the teacher gave a signal to the children. They became noticeably quiet and then smiled and shouted, “SPASIBO.”