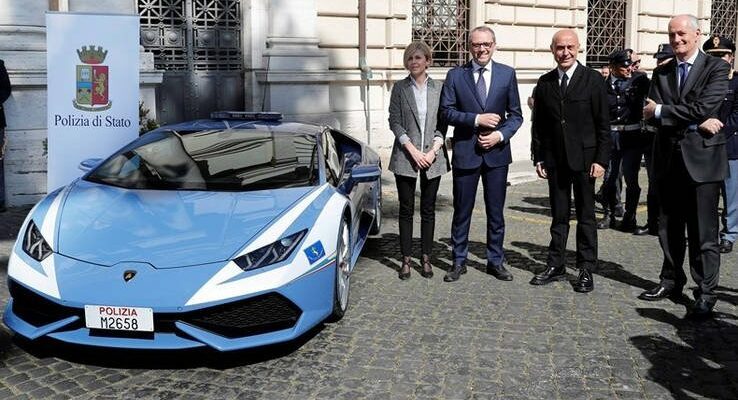 Stopping criminals one Lamborghini at the time

I don’t know how many cases of street racing and car chases there are in Italy, but the speed gene is part of Italy’s DNA. There must be enough cases at least to justify the need for a super-sports car on the state police fleet. If you needed any extra reasons to want to set foot in Rome, a chance to catch a peek at the police’s shiny new azzurro-blue Lamborghini Huracán should convince you.

Signore Stefano Domenicali, CEO at Lamborghini, handed the keys for the new law enforcing mean machine to the minister of internal affairs Marco Minniti. The Huracán will replace the outgoing Gallardo that has been serving and protecting since 2009. With 150,000 kilometers on the odometer, the Gallardo will be retired at the police car museum in Rome – because any excuse is a good excuse to have a car museum. Even police cars.

The Huracán, will chase criminals at a top speed of over 300 km/h. Capable of running the 0-100 in 3.2 seconds, catching speeding drivers will be a breeze. Only 24 officers across the country are trained to drive one of the two Huracán on the force. The first Lamborghini Huracán joined the force in 2015; this is the second one. There is still a way to go before the Italian law enforcement fleet becomes as sexy as the one in Dubai, notorious for its flight of exotic super-sport cars. This is definitely a step up from the RCMP.