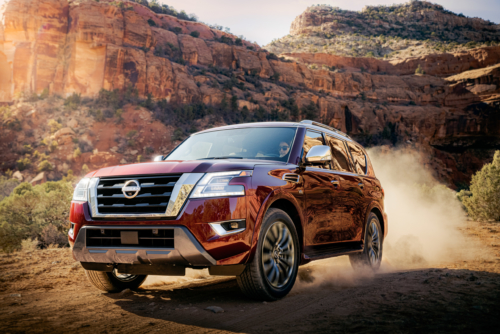 Armada’s rugged yet refined exterior matches its capability – with a more squared and chiseled appearance from the A-pillars forward. The new front fenders, grille and bumper are framed by a new LED headlight design with more than 50 LEDs in each headlamp, helping create a wide, bright headlight pattern.

The big, brash and altogether bruising Nissan Armada three-row SUV is getting a refresh for the 2021 model year, and with it comes the next application of the new “face of Nissan” which includes new headlights, new V-Motion grille application, new bumpers, new hood, new fenders and, for the first time ever on a production car, the application of Nissan’s new grille emblem. While Nissan didn’t say this directly, you have to think that fact alone has turned the aptly-named Armada into the flagship for the Nissan brand.

Like previous, the Nissan Armada is, in the words of Scott Pak, Manager of Product Planning at Nissan “heavily linked” to the go-anywhere, do anything Nissan Patrols that have served duty in various arid climes for decades now. They are durable, they are capable and they are dependable and those are key selling points both overseas, and here in Canada.

Power still comes from a single engine source: the 5.6-litre V8 good for 400 horsepower and 413 pound-feet of torque, fed to the wheels through a seven-speed auto. That horsepower is best-in-class, as is the 8,500 lb. tow capacity. It’s not a big class, mind, but one that features capable vehicles like the Ford Expedition and Chevrolet Tahoe. The Armada also has an electronic locking transfer case with auto, 4H and 4LO modes and two- or four-wheel limited slip differentials.

The big news, however, is actually seen on the inside where along with the new logo, the Armada refresh sees the debut of an all-new centre stack, crowned by a 12.3” infotainment display as standard that is larger, faster and more intuitive than what’s currently seen not just on the Armada, but on all Nissans. Its home screen is customizable with a number of widgets – or, just forget all that and use Apple CarPlay or Android Auto, the former of which can be connected wirelessly which dovetails well with the standard fitment of wireless charging.

A digital rear-view mirror nicely compliments the digital display and makes it so you can load items higher in back without compromising outward visibility; this is especially important if you’re using the third row of seating. Speaking of storage: the front seats see a nifty central storage bin beneath the armrest that can either be opened by the front- or second-row occupants.

The best part for many will be the fact that the buying process is simple; the 2021 Armada will be available in just two trims: SL and Platinum. The only options available – other than colour and wheel choice – is a second-row captain’s chair package on the Platinum. The Platinum, for its part, adds quilted leather seating, rear-seat entertainment system, traffic sign recognition, rain-sensing wipers, rear collision intervention and 22” wheels, while the SL gets leather seating, heated front seats and steering wheel, moonroof, 13-speaker Bose audio, remote engine start and 20” wheels.

Pricing and fuel economy figures have not yet been announced; expect that closer to the Armada’s release early next year. 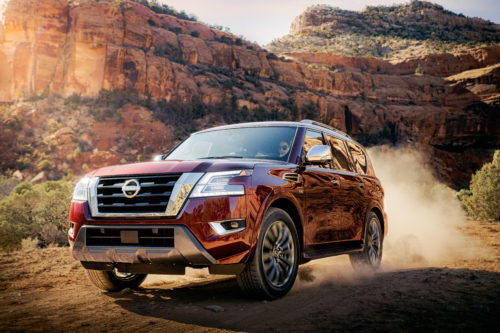 Armada’s rugged yet refined exterior matches its capability – with a more squared and chiseled appearance from the A-pillars forward. The new front fenders, grille and bumper are framed by a new LED headlight design with more than 50 LEDs in each headlamp, helping create a wide, bright headlight pattern. 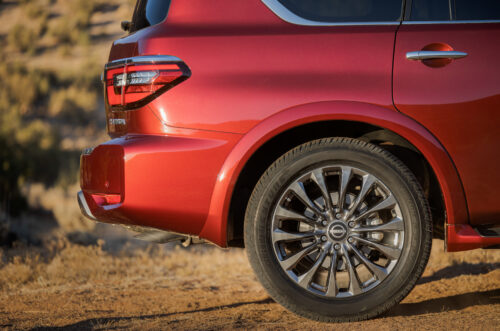 With a new look, enhanced safety features, a long list of standard technologies and a powerful 5.6-liter V8 engine, the 2021 Nissan Armada is built for adventurous families who expect it all, especially in their SUV. 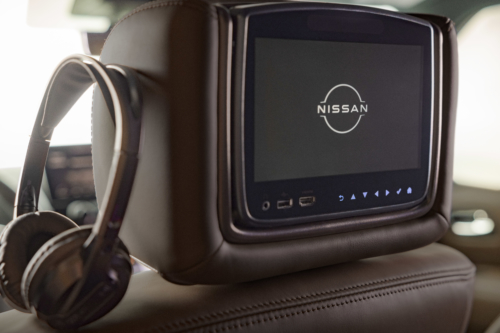