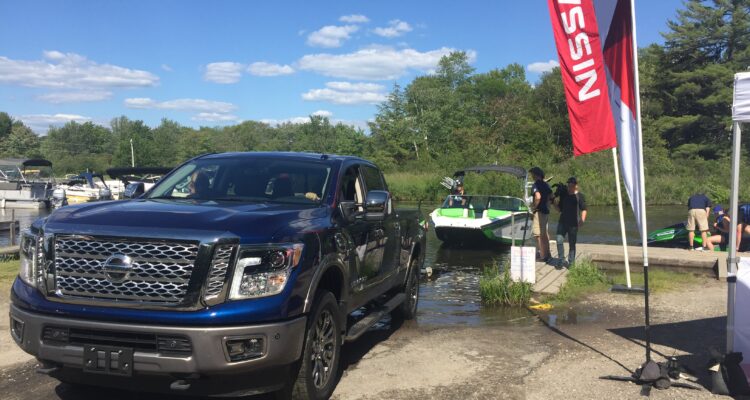 It’s after noon on a rare hot, sunny day in the Muskoka region when we pull into Parkers Marina not far from Port Carling, Ont. We’re in a 2017 Nissan Titan XD towing a 23-foot Mastercraft speedboat and our task is to launch the boat.

Now the launch at Parkers isn’t tiny, but I have seen bigger. Looking out past the boat and with perspective working against me, it almost looks as though the trailer won’t fit.

Sure enough, backing toward the ramp with my hand on the lower part of the wheel — so I can move my hand towards where I want the boat to go — it soon becomes apparent the trailer will fit. Just. 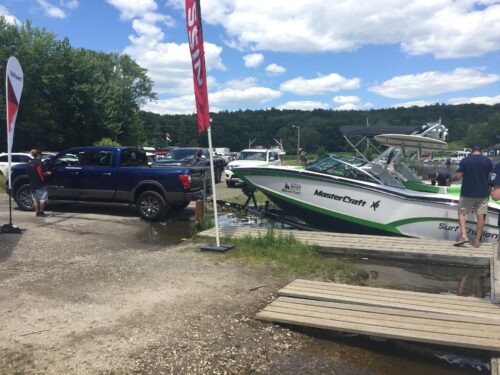 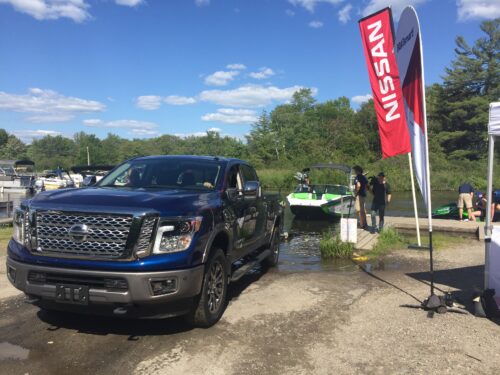 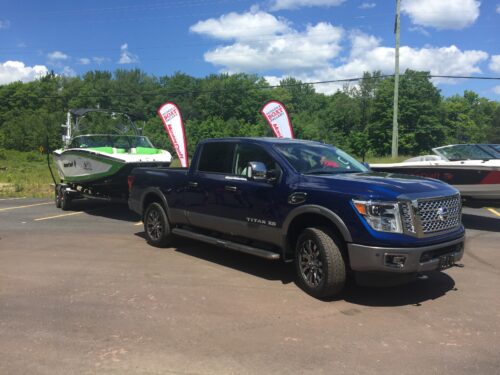 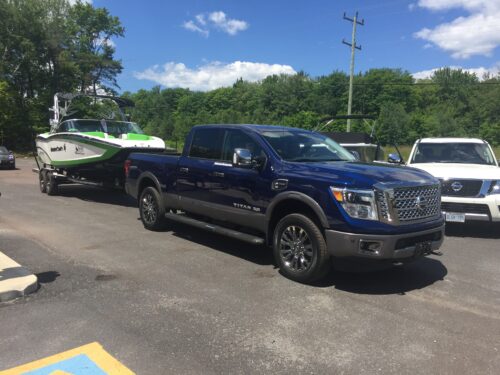 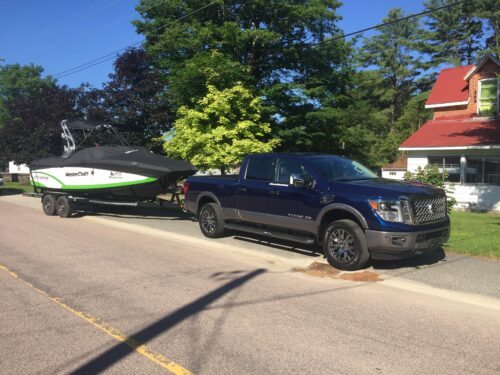 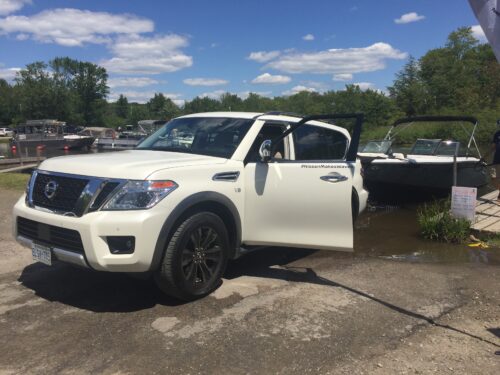 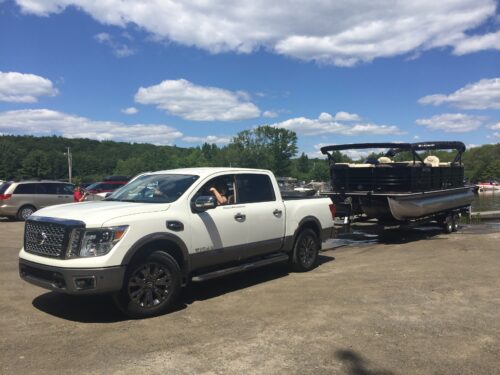 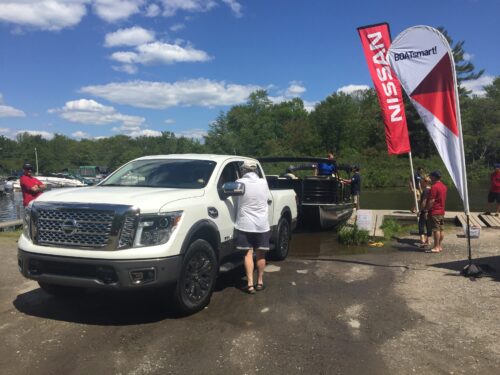 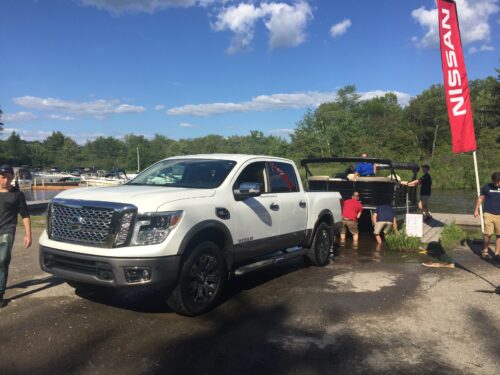 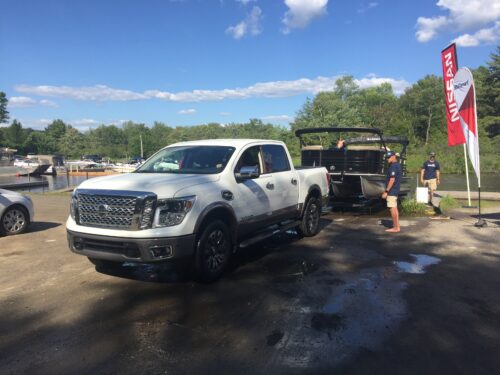 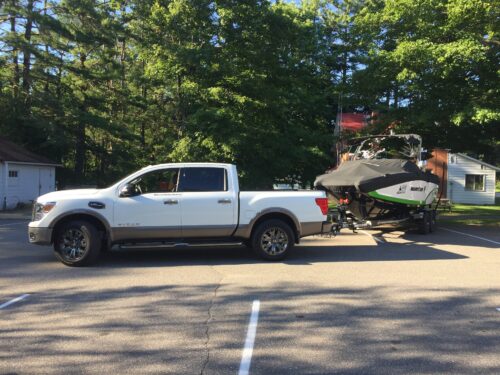 About an hour earlier, we hooked up the Titan to the trailer and quickly realized that sound we had just heard was the collective truck world doing one massive facepalm.

The Titan has a unique feature so fundamental to towing one can’t help but think the Ford, Chevy, GMC, Ram and Toyota truck designers are scrambling to their cubicles asking themselves, “Why the heck didn’t we think of that?”

If you’ve ever towed, you know how it goes. You hook up the trailer — crossing the safety cables under the tongue, inserting the lock pin to keep the hitch from unseating from the ball, plugging in the lights — and then call into the house for help checking the trailer lights.

If you’re alone, it’s even worse: turn the signal on, run to behind the trailer, run back to the cab, turn the other signal on…

What if you could do that from the key fob? With Titan, you stand behind the trailer and push the lock button once and then push and hold it till the horn sounds again. At that point, the truck cycles through both turn signals and the brake lights. Sometimes the simplest things are the most brilliant.

For the drive up here, the diesel-powered Titan XD we’re driving is merely snacking on the job of towing this boat. On acceleration, it’s easy to forget you’re towing.

Today, having the rear camera positioned directly above the hitch is the benchmark for trucks and back-up cameras. Titan goes a step further, projecting a centre line to make backing into a trailer’s tongue even easier. It eases adjusting for centre when you’re approaching at an angle.

Unfortunately, while the side markings in the camera view turn to project the truck’s path as you turn the wheel, the centre line does not. Such would be the cat’s meow.

Nissan has got a tough nut to crack selling Titan. The previous model barely scratched the truck market’s surface with about a one per cent share. It’s just not a go-to brand the way Ford, GM and Ram have become.

The first step was designing a truck that’s competitive with the Big Three. The second step is finding unique ways to market it.

Key to both is perhaps the Titan XD. More than a 1500-series, less than a 2500-series, “it’s the white space in the market,” said Nissan spokesman Didier Marsaud. “It is for the pickup buyer who is looking for just a little bit more.”

That little bit more isn’t insignificant, as the XD with the Cummins V-8 turbodiesel is rated to tow 12,010 pounds. That doesn’t beat the highest available ratings for F-150 or Silverado, but it does put Titan into the ballpark, and it’s worth pointing out those rivals don’t have a diesel option. Ram does, however. Perhaps most importantly, Titan’s top tow rating beats Toyota Tundra’s by nearly 2,000 pounds.

Nissan launched the new truck with only the XD model to start. The Titan (without the XD) came this year.

Still, in a market where a Nissan isn’t the first, second or third truck to come to mind, having a competitive product isn’t enough. Marketing requires finding innovative ways to overcome preconceived notions and get people to at least look at it.

“When they are behind the wheel, a big, big part of our job is done,” Tappinder Jhajj, Nissan Canada’s product manager for trucks and SUVs, said. “We have a very strategic approach — we’re not insane about it thinking we’ll sell 10,000 a month — but our approach is to target markets where we think we can steal some customers away.

“In the urban markets, you might have a very successful individual with a Mercedes or BMW who needs something to tow his boat, or whatever. For him to look at a Nissan isn’t scary, it’s right up his alley.”

Nissan is targeting five to six per cent of the truck market, a five- to six-fold increase over the previous model’s market share.

A partnership with BoatSMART!, which bills itself as Canada’s largest provider of boating education and licensing, is a part of that strategy. BoatSMART! uses Nissan trucks exclusively for its events in Central Canada, and encourages participants to see and drive the vehicles. For the rest of Canada, BoatSMART!’s relationship is online, but every person who acquires a personal craft operating competency card through BoatSMART! gets a discount offer for Nissan vehicles.

“There are about 150,000 certificates obtained each year in Canada, and we’re by far the largest provider,” said Cam Taylor, president of BoatSMART! and its related companies. “It’s a pretty big pool of qualified leads we give to Nissan.”

On the flip side, Nissan customers get information about BoatSMART!, so the relationship flows both ways.

Interestingly, Nissan has dispensed with the loss-leader approach — advertise a base-model truck in the low to mid-$20s and upsell buyers to the mid-$40,000s, which is the typical transaction price in Canada. Instead, Nissan is offering trucks already well-equipped and already in the mid-$30,000s to high $50,000s. That combination of pricing and content is competitive with the models most likely driving off Big Three dealer lots. The base-model Big Three truck is primarily aimed at fleet buyers, even if it does offer dealers a loss-leader advantage.

The top Titan base price, for the platinum diesel version, is $76,500.

The Titan was designed, tested and built in North America, and comes with a fair bit of Canadian content, as well. Steve Moneypenny from Brampton, Ont., designed the interior while Vancouver’s Randy Rodriguez, who has since left Nissan, penned the exterior.